these are sitting on my worktable right now.  i’ll be able to assemble two today. a little more patience, my camera modding workshop is finally setup ! 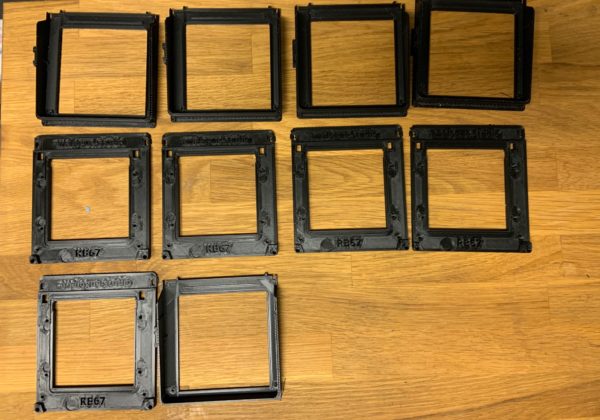 hi everyone, and apologies for the delays (again).

just moved into a new house and can now resume work.

i am now working through the remaining April (gasp!) orders, and those should ship mid June

thanks for bearing with me, it’s been some crazy 2 months with all the packing/moving.

on the new products line, I may have some Mamiya Instax Wide bodies up as well soon, as I unpack the boxes with parts.

A hopeful if tardy update of the orders situation post -review in Emulsive.

I am currently catching up on orders, and JUST shipped my first (kit only) order in line from mid April.

Bear with me. I anticipate to get all those mid April orders out in the next two weeks. You will receive an email update as I print out the label in Paypal and ship.

Also, for the customers on the waitlist, I will make a bit of progress on that too, I have about 6 IP labs coming my way. I will keep everyone posted once I’m done shipping the mid april orders and I can get onto the new ones.

Also, for now and till I make a sizeable dent in the shipping backlog, any new order will have about 3 weeks lead time from the moment of payment. Apologies, again I’m a one man shop with a day job too..

Yes I know I’m no pioneer and I know that https://sprkplg.com/ popularized and is selling 3d printed adapters to do the same thing.

But when you have pesky customers (that shall remain unnamed on request) who’re not quite happy with the existing solutions and really need their lens to be upright, you get to work.

Long story short, I designed my own version of an an adapter that allows me (and you!) to mount a Mamiya Universal Press (MUP) lens on a Fuji Instax Wide 300 camera.

Of course, you’ll need to disassembly the Fuji Instax Wide 300, remove the electronics and rewire the eject to be triggered by pushing the trigger button, and cut a bit of the plastic “nozzle” on the Instax Wide, but none of that is very difficult. It just takes a bit of time and patience. And a Phillips 00 screwdriver and a wire cutter to cut the plastic, and maybe a file to even out sharp edges.

I added a 3/8″ tripod socket with a metal insert, and this is built into the lens collar/adapter, so it centers the weight better.  And I went through two iterations with this, first using a narrower adapter, but then going for a wider base, though that may be overkill.

A under the hood improvement is the way the adapter mounts on the Fuji Instax Wide body, as in it uses an existing breech mount on the nozzle to mount and register the adapter. This results in a consistent mounting position and assured the tripod socket is always vertical and the mounted lenses end up upright.

Why is that last bit important? Initially I thought of that being just a cosmetic issue, but then Leong really wanted to use this with his Mamiya Universal Press 100mm 2.8, and this lens has a rectangular field stop on the film end of the lens and if that ain’t vertical, you’ll notice, to the tune of half a degree off.  It ended up that because of the internal light cone of the Fuji Instax Wide, this particular lens vignettes a lot.  So I’ll have to actually make a V2 of this with a replaced / designed in house light cone for the MUP 100 2.8 (or the 65mm 6.7 for the matter). Not there yet.

So while we’re at this, I tested this build with the MUP 100mm 3.5 and the 90mm 3.5 lenses and I recommend you use these. Another _good_ reason to use these lenses is that the original plastic crap lens that Fuji decided they’d use in all their instax wide cameras is a 90mm focal lenght lens. Thus the viewfinder it designed for a 90mm lens. But since the MUP 100 3.5 is a lot easier to find, I’d go fo it. It provides almost perfect coverage for Instax Wide, with only a bit of corner darkening at 3.5.

I also made a trivial but oh so useful improvement, I added a little raised plastic ring around the trigger button. How’s that useful? Before adding that, I would accidentally touch that trigger ALL THE TIME,, resulting in partially ejecting a frame and well, losing it. Same thing would happen inside a non padded camera bag. I once ejected a whole pack by mistake. While typing this I realize that I could really add an on off button switch somewhere (I think rewiring the existing on off may not be possible, or not really useful since there would be no indicator the camera is now on and I really don’t want to add an extra led for that). So there you go, something you didn’t know you need it but you really did and now it’s there.

And thanks for an idea by another modder/builder out there, I printed a little holder for a standard cable release that allows you to shoot the way you should, using your index finger to push on something. If you’re right handed. I know, I DO need to find a either hand solution.

So that’s that for now. With my 3d printers in storage till early July, I really only have one camera ready for sale (after I sent one to Leong), and that’s the one I’m currently using.  It has all those improvements, cable release holder, and two cold sockets designed for light meters, flashes, or electronic range finders. None that I use, but you may. This is the “all dolled up version”.  I may have another copy with no cold shoes or cable release bracket, but the adapter is reall tight (it was a draft) and I’m not comfortable selling that to anyone, I’d rather use it myself if the “dolled up” version sells,

So go ahead, buy your Mamiya Instax Wide from my Candy Store!

I’ll need to shoot a “how to” video to cover the eject part, but luckily enough, it’s a fairly trivial and consistent process with these Fuji Instax Wides.

So yeah, I finally managed to shoot another embarassing video of the conversion process, this time for the new Mamiya Universal Press / Polaroid 600SE conversion kits.

I just completed a Impossible Lab Polaroid Back for Polaroid 600SE cameras / Mamiya Universal Press and decided to shoot a little how to video demonstrating the use of the back and how it can be used to shoot photos with landscape/portrait orientation.

Alright so i had two potential customers asking me how my RB67 Polaroid Backs work, so it was time to get of my lazy butt and make a demonstration video!

Well, in the process of making the latest build of a Polaroid 110B/Instant Wide  , I discovered a way to make the eject automatic!

You press the eject wired button on the back (currently the flash button) and voila, automatic eject!

Polaroid 110B with Instax Wide Back

So, some status updated on existing and new products:

Introducing the latest Analogue Studio product, and a natural evolution of our conversion kits for Impossible Labs!

Give search a chance